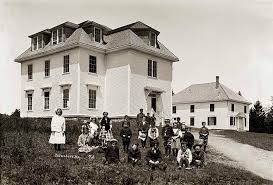 An Anchor to Windward -

This article aims to re-acquaint the residents of Islesboro with this unique and
timeless resource, its history and work. While the members of the Islesboro
Community Fund exercise strict confidentiality with behind-the-scenes support,
discreteness shouldn’t mean invisibility!
According to the History of Islesboro Maine 1893-1983, “A group of Dark
Harbor summer residents formed the Islesboro Community Fund at a meeting
held on September 3, 1950 at the Islesboro Inn. The Fund was organized to
“promote the health, welfare, education and happiness of those Islesboro residents
in need of assistance, and other charitable activities considered worthy of
support.”
With these goals still firmly in mind, the Fund has matured into an island-wide
resource for tough times. It is through the generous support of all islanders that
we care for our extended family.
The minutes of the first annual meeting, August 1951, reflect wide ranging
concerns. One was road conditions and streetlights, another, the Dark Harbor
Pool which was considered an Islesboro resource. The minutes noted that half
of the Second Baptist Church operating funds came from the Community Fund.
Efforts were undertaken to expand the hot lunch program at the Pendleton School.
Island doctors were to be advised that funds were available
for medical aid to needy families.

Responding to medical and dental funding requests then and now has been a
large part of the Fund’s work with direct payments to doctors, dentists, and
hospitals. Money for prescription drugs and glasses continue to be made
available. In the pre-Islesboro Ambulance Association years, ICF purchased
equipment for the Town’s ambulance. Years ago
Deece Ruggles’ Hospice program received funding.

The Island’s children were, and are, a top priority. The school lunch and milk
program created in the first few years of the Fund’s existence lasted at least until
1974 when in 1977 support seems to have become “provided for by federal
funds”. The Islesboro Preschool was a frequent recipient of the Community Fund’s
support. In 1981 Lisa Davis asked the Fund for $500 to start the Preschool
program. Over the years, the ICF provided for equipment, scholarships, and
budget shortfalls. A building fund was added to for several years while the
Preschool parents looked for its permanent home. In 1990, $3500 helped the
Preschool move into the 2nd floor of the municipal building. In 1988 funds were
allotted for a Santa Suit, on condition it be loaned out to other island entities
needing to clothe a jolly old elf. (It’s believed this very suit was donned by one
Santa Rex-Waller at this year’s Preschool Fair.)

The Community Fund helped older children afford courses on the Harvey
Gamage and at Camp Kieve. Summer tutoring and recreation programs, basket-
ball camp, and Scouts have all been helped with funding. ICF grants helped a
teen center get up and running in 1973, another in 1993, and Toni Daly’s CETA
Youth Program in 1977. This past summer ICF worked together with a student
to fund a three week summer camp focused on female empowerment.
The School received funding for a variety of needs and projects. In 1963 a
$244 “educational tv” was purchased complete with antenna and rotor. Grants
were given for the Art Class, supplies as well as the teacher’s salary. In 1977,
two pottery wheels and a loom were funded for the adult education program.
Today, by far the ICF’s most significant assistance continues to afford the
school thousands of dollars of scholarships. At the August 1964 annual meeting
members voted to grant at the discretion of the faculty two $500 scholarships. In
1969 when the Board was hoping students would return to the island to practice
their craft, it was decided that one $500 grant would go to the top student and
$1000 for each of two years to a student planning to attend vocational school.
These days, nearly every graduate plans a post-secondary education, and with
tuition, fees and financing soaring to punishing levels, the ICF Scholarship
Program is a major outlay of the annual grants. For the 2018-19 academic year,
17 scholarships ranging from $1500-$3000 were awarded, totaling $36,500.
Commonly 30% of the Funds’ expenditures are scholarships.

Since the eight founders gathered in 1950 more than 120 islanders, both
summer and full-time residents, have served on the ICF Board.
Past Presidents start with Elizabeth Guest (1950), Beatrice Islein (1951), Anne
Breed (1962), Gladys Thomas (1968), Theodore Caplow (1974), Agatha Cabaniss
(1975), Ruth Pratt James (1980), Agatha again (1982), Patricia Lee (1984), Mitch
Hutcheson (1988), Jean Anderson (1990), Mary Homans (1996), Christine
Tiffany (?) and Lanny Thomas (2001). Current Board President Laine Alexander
has held the position since 2012.
Ex-officio members appeared on the Board early on. In 1951, Rev. Anson
Williams was the first clergyman listed among the Board members followed more
recently by Ed Bacon and David Boulton. Such discreet community members
are often the trusted link to those needing the Fund’s aid.

Since many of the requests for assistance were and remain medical in nature it
was common sense to have the Town’s doctor aboard. Dr. H. Stanley Warren
was nominated as a member in 1972 and now Owen Howell PA-C is a director.
Cecil Creelman appears to be the first Head Selectman invited onto the Board in
1973. Currently Deputy Town Clerk Cindy Gorham serves and helps to answer
lots of questions!

That’s some history, now let’s talk about contributions and need.
Each year an appeals letter is sent out.  Ruthie James’ 1981 letter is satisfyingly
to the point: “This is the annual appeal for the Islesboro Community Fund. The
Fund is discreet and pleasurable- sometimes people are sad and sometimes the
school needs trumpets. The wish is that everyone gives and feels part of the
community”.The current Board aims to have the whole island participate. This year’s
appealappeared in your box in November welcoming contributions however large or
small from the entire community. In 1975, 289 appeal letters went out securing
$2,260 in donations. In 2017, 554 letters went out and $87,000 was contributed,
enough to meet the current needs of those requesting assistance.
Lately, life’s struggles have been eased for island residents with the Fund
paying power and fuel bills, and rent or mortgage payments in times of crisis.
With the 100% rate increase ferry tickets and gas cards for those travelling to
weekly medical treatments are a regular occurrence. Roofs have been patched
and chimneys lined. Dozens of cords of wood have been purchased over the
years. In 1989, two kerosene heaters were purchased for the Fire Department to
distribute as needed. A local contractor was hired to clear alders and brush from
beside a driveway where the ambulance had trouble navigating on frequents trips
to an ailing resident’s home. Annual holiday baskets or Island Market and
Durkees’ gift certificates have been distributed. This Thanksgiving 23 gift cards
totaling $2,325 were given out and likely the ICF will grant
similar gifts for Christmas.

If you have a financial burden that the Islesboro Community Fund could relieve,
if you know of someone who needs help, please let us know. We are here solely
to provide assistance. There is no judgement and nobody else will know. We all
need help at times. In a 2001 issue of the Islesboro Island News, then president
Lanny Thomas put it best: “Everybody who lives on the island should consider
themselves a member. We need eyes and ears. We need a community willing to
tell us where we would be of use”. And we need everyone’s support.

The ICF website www.islesborocommunityfund.org supplies
appropriate applications, or write to the ICF at PO Box 166 or contact any Board
member directly: Laine Alexander, Brita Bonechi, Bob Clayton, Cindy Gorham,
Marny Heinen, Owen Howell, Joan Lillie, Sharon McCorison, Marjorie Mills,
Maxine Nelson, Taz Stafford, Fred Thomas, Landon Thomas, Mark Umbach and
Maggy Willcox.
Clarence Dillion secured non-profit status for the Fund in 1951, so you can
make a tax-deductible donation of any size. If you have been a recipient of ICF
help during a rough patch, think about paying it forward when you can with a $5
or $10 donation. You will help guarantee that we go on being a
“Resource for Tough Times.”

By Marny Heinen and Maggy Willcox